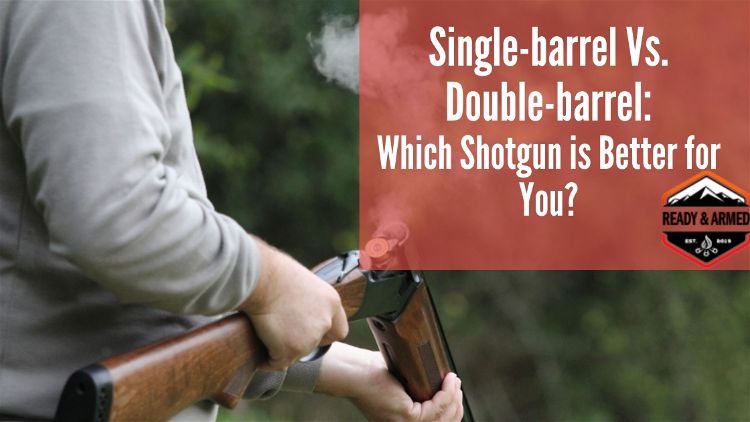 A shotgun is one of the best weapons for self-defense. People love shotguns because of their incredible ability to cast a wider shot pattern and take down a thief or intruder, even when used by an inexperienced shooter. Only shotguns can fire multiple projectiles each time you pull the trigger, which makes it more lethal.

Their compact design also makes it easy to carry with you wherever you go, thus guaranteeing your safety and the safety of others around you. In this article, we will review these two styles of shotguns in detail to help you make an informed decision when shopping.

What Is a Single-barrel Shotgun?

Just as its name suggests, a single barrel shotgun is a firearm that only holds a single round of ammunition. Once you fire, it must be reloaded before taking another shot.

Perhaps the biggest benefit of single-barrel shotguns is their excellent safety features. That is why they are highly recommended for beginners.

A vast majority of shotgun models are equipped with a transfer bar safety action and a spur hammer plus an integral system that prevents the action from opening or closing when the hammer is cocked, thus preventing the shooter from firing accidentally.

Single barrel shotguns also come in various gauges, from .410 bore to 10-gauge, meaning you can choose one that suits your needs. Single barrel shotguns do not have complex reciprocating actions to load or unload shells, as is the case with semi-autos. As a result, they are super easy to use.

A beginner can quickly learn how to load, unload, and reload a single barrel shotgun just by practicing for a few minutes. It is also lightweight and easy to clean. So, in the long run, you can save on the cost of maintenance.

What Is a Double-barrel Shotgun?

A double-barrel shotgun is a break-action shotgun with two parallel barrels, which allows you to make two single shots with quick succession. Double barrel shotguns have a double trigger system where each barrel is controlled by a dedicated trigger that cannot be switched.

However, you can change the sequence that the triggers are pulled. Since no reciprocation action is needed to reload or eject shots in double-barrel shotguns, they are more compact than single barrel shotguns.

Now that we have reviewed these two shotguns, the big question that you are probably asking yourself right now is which one between the two is better? Generally, double-barrel shotguns are better because of their ability to make two quick shots, their compactness, and reliability, among many other great features that they are equipped with.

However, as discussed above, these two shotguns have their own unique features that make them special. Therefore, when deciding on which one to buy, it is important to consider your individual needs.