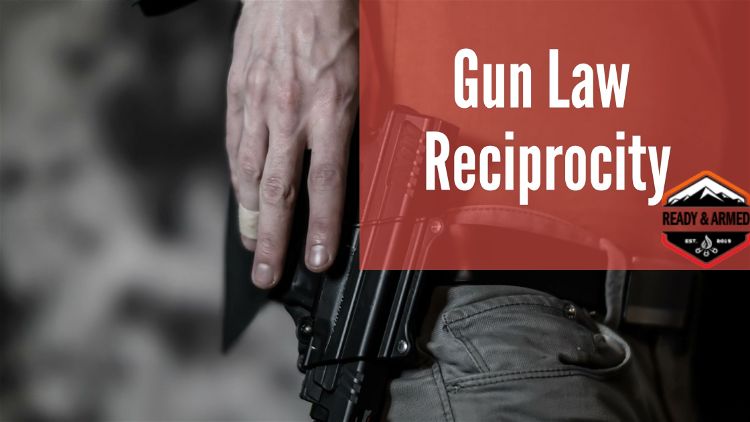 Per the United States’ reciprocity gun laws, there are some states that will honor a concealed gun carry permit from any other US state. But, at the same time, others do not and, instead, ban non-residents from carrying any handgun in their state. Therefore, if you own a firearm and travel a lot, it is crucial that you familiarize yourself with reciprocity in gun laws, so you know where your permit applies and where it doesn’t.

Reciprocity is a legal scheme whereby certain states have made agreements with other states to honor some or all of their state licenses to carry a concealed handgun as valid for reciprocal carry in their state. States have different laws concerning reciprocity, with some states having no reciprocity allowances at all.

Even if your state is reciprocal with another, it is not a guarantee that you can carry a handgun in the states that your state allows. The two must have a mutual agreement. Whichever is the case, you should always keep a gun safe at home to store your guns. You can check the article where we have discussed the benefits of owning a gun safe.

In most states, the legislative body in charge of authorizing reciprocity agreements is the state’s police, attorney general, or another relevant agency. The governing body must check that its state’s laws fully recognize the reciprocity of licenses carried by firearm owners from another state.

States that share reciprocity agreements often have near-equal verification and licensing requirements in terms of training and qualification. Such states agree that their gun-carrying statutes match and then make a written agreement to accept each other’s licenses. This is done to ensure that state residents are protected against unsafe gun handling by non-residents.

States with No CCW Reciprocity

Some states and districts do not adhere to reciprocity in gun laws regarding US-issued concealed handgun carry permits. They include;

New Jersey is one of those states that do not honor any CCW permits from other states in the country. So, if you are a non-resident and you intend to conceal carry in New Jersey, you will need either a resident or a non-resident license.

Nonetheless, 14 states accept a New Jersey-issued CCW permit. A good example is Michigan which honors New Jersey CCW permits for residents if you meet all the requirements for firearm possession set by state laws.

New York does not recognize any license or permit from other states. But, if you are a resident, part-time resident, principally employed, or a business owner in New York, you can obtain a pistol license from New York City, which is valid statewide. However, a New York Pistol License is not honored in any of the five counties that make up New York City. So, no handguns are allowed into the city unless New York City has validated your license.

Connecticut does not honor any non-resident licenses or permits and does not have any gun reciprocity agreements that allow all non-residents to carry handguns into their state. However, with some exceptions, you can transport unloaded handguns through the state for lawful purposes without a Connecticut permit or carry a firearm in the state if you meet specific requirements.

California is one of those US states with stringent gun policies. The state does not honor permits from other states and does not have any reciprocity agreements with any state. Therefore, you must reside in California if you want a California concealed carry permit.

In terms of reciprocity, Illinois does not recognize any CCW licenses from other states. However, non-resident permits are available for Arkansas, Mississippi, Virginia, Idaho, and Nevada residents. This means you must have an Illinois permit to carry a firearm in the state.

Maryland does not recognize any CCW license or permit from any other state. The only exception is armored car drivers who are either on duty or have a valid CCW permit from other states.

Massachusetts does not honor any CCW license or permit from other states. Therefore, as a resident, you must pass a background check for you to purchase a firearm.

The Concealed Carry Reciprocity Act of 2017, also called the House Bill 38, was introduced in the 115th United States Congress on January 3, 2017, by a North Carolina Republican, Richard Hudson. Hudson was the main bill’s sponsor, but the bill also had other 200 co-sponsors.

The primary purpose of this bill was to amend Title 18 of the United States Code to require that all US states honor all concealed carry permits granted by other states. In addition, the bill was to allow the concealed transportation of handguns through state lines, provided it was allowed by the involved states. Additionally, it would amend the Gun-Free School Zones Act of 1990, which barred permit holders from carrying concealed weapons across the school zones in any state.

On November 29, the House Judiciary Committee voted in favor of the bill to advance it for a vote. They combined the bill with another bipartisan bill to improve the National Instant Criminal Background Check System (NICBCS). Later on December 6, the House passed the bill voting 231 to 198.

By now, you should fully understand that reciprocity is not a federal right but a state-based right that varies across jurisdictions. Even if one state recognizes another state’s CCW permits, there may be no reciprocity between them if the other state does not do the same. Therefore, it is up to you to study reciprocity laws before traveling with your concealed carry.