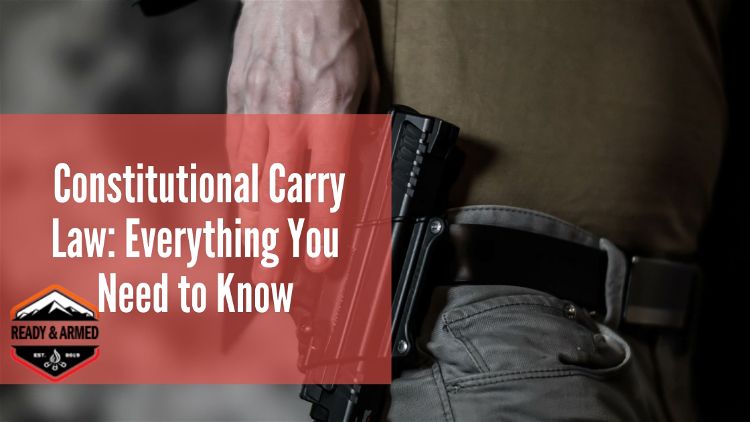 In a state that allows constitutional carry, one can have firearms without any licensing and training. The law is based on the second amendment of the Constitution of the United States of America.

Based on this second amendment, gun licensing programs and the constraints of carrying a gun without a permit would be considered unconstitutional. However, several discussions have included whether the proposed gun regulation could save lives or even prevent disaster.

Florida was among the first states to enact the law of carrying concealed firearms. Several states later followed the adaptation of this law, with Illinois adopting it in 2013.

However, in most states that allowed this regulation, it was still a requirement that the carriers must obtain licensing. Therefore, one ought to have substantial training before obtaining the license.

For instance, in Kentucky, you would have to have physically supervised practices to get a permit. A target was set, and if the applicant reached the number of shots they indicated, they would be allowed to have a license. In Illinois, one must have at least sixteen hours of firing experience to have a license.

The NRA and Gun Rights Supporters

The National Rifle Association and gun rights support groups were against the licenses and screening standards. The groups urged that the existing gun laws were enough.

Further, they argued that the background checks that one required to be permitted to have a license were an invasion of privacy. One is entitled to the right of privacy, and digging deep into one’s personal life without their permission is a breach of this right.

Gun support groups have fought to expand gun owners’ immunity over the years. As a result, the aspiring gun owners do not receive prosecution and any litigations arising from how they use, carry, or even display their weapons.

Constitutional carry relieves most of the trial and litigations arising from owning a gun. Additionally, if new gun owners pass a background check to obtain a firearm, they can carry the firearm without having a license. Although, it is still good to acquire one if you want to visit states with stricter laws.

Which States Have a Constitutional Carry Law?

The constitutional carry law will be effective on July 1, 2021, and September 1, 2021, in Tennessee and Texas. In addition, the six states of Delaware, Virginia, Nevada, New Mexico, North Carolina, and Louisiana allow a permitless open carry of a handgun.

It is mandatory for the citizens in these states to abide by the land laws and not take advantage of the constitutional carry law. Every state has its own laws. One cannot exercise this law outside their jurisdiction. If found with a firearm, they will be arrested in a state that does not permit the law, and nothing can be done, as it is considered an offense in that particular state.

One may wonder why some states allow the law and others don’t. The federal government does not decide on common law for all the states, so they can each have their own gun laws.

However, as outlined in the tenth amendment in the United States Constitution, certain powers are given to the federal government by The Constitution. Therefore, if the Constitution does not prohibit states from certain laws, then they can make their own decisions.

All the states, apart from Vermont, have allowed the constitutional carry and permit, enabling the residents to travel to different states. However, it is advised that you acquire a license, even if you live in a state where a permit is not required to own a handgun.

The license will allow gun owners to visit states that require one to have a license, such as North Dakota and Tennessee. Make sure to do detailed research about the states’ constitutional carry laws before a visit to avoid getting into trouble.

The different states have restrictions on how the constitutional carry law is implemented. For example, in some states, such as Utah, one can carry the gun into a bar, but one cannot be under the influence of alcohol and still possess the firearm. If your blood has an alcohol content that is above 0.05, and you have a gun with you at that very moment, it is considered an offense, and you will be subject to losing the gun and facing charges.

Another example is in Arizona, where you must have a valid Arizona concealed permit to enter into a restaurant with a gun. In most states with the constitutional carry law, it is illegal for a person to be drunk and still have a firearm with them.

In most states, you must be over 21 to be permitted to own a firearm. The constitutional carry law allows low-income individuals to protect themselves without being a burden to the state. The regulation also reduces government bureaucracy and trims the expenses that it incurs on the licensing agencies.

It can also be argued that the crime rate may notably be reduced if more people carry firearms. In the last decade, the number of issued concealed carry licenses has tripled, and the number of murder rates in some states has decreased significantly.